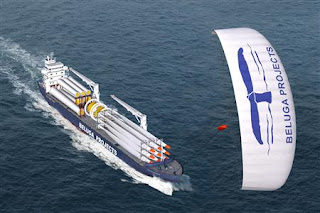 HAMBURG, Germany (Reuters) - Turning ocean winds into gold while cutting greenhouse emissions in the process might sound like some sort of alchemy for the 21st century.

But unlike futile earlier efforts to convert ordinary metals to gold, two fast-growing German companies have worked together developing a high-tech kite system to pull enormous ships across the oceans -- and save enormous amounts of money.

It is a throwback to an earlier maritime age, harnessing the winds that fell out of favor over a century ago when sailing lost the battle for merchant shipping to modern steam power because it was seen then as primitive and unpredictable.

But now, in the age of climate change, wind power is making a remarkable comeback thanks to modern technology.

"This is the start of a revolution for the way ships are powered," Beluga chief executive Niels Stolberg said in an interview with Reuters on the windswept deck of his new ship MV Beluga SkySails. "It's a small but crucial step for the future."

To latch onto the powerful winds prevailing well above the surface, the kite attached to the high-tech steerage unit flies up to 300 meters high to tug the 10,000-tonne ship forward, supporting its diesel engines and cutting fuel consumption.

Under favorable wind conditions, the 160-square meter kite shaped like a paraglider is expected to reduce fuel costs by up to 20 percent or more ($1,600 per day) and cut, by a similarly significant amount, its carbon dioxide emissions.

TOO GOOD TO BE TRUE?

A driving force for Beluga -- and other shippers already lining up to buy the system if it delivers on its promise -- is the fuel price, which has tripled for shippers in recent years.

While it might seem almost too simple -- or too good -- to be true, SkySails inventor Stephan Wrage and German engineers have spent more than five years perfecting the system and they will tell you that it is anything but pie-in-the sky technology.

"At the heart of this all for me, the real motivating factor is to get to the crossroads of ecology and economics -- and to prove it pays to protect the environment," Wrage said in an interview on the ship so new it still smells of fresh paint.

While some political and industry leaders complain about the financial burdens of fighting climate change and cite costs in resisting CO2 reduction efforts, Wrage said SkySails is proof that the opposite can be true: there's money to be made.

"If our calculations are right, our clients will not only have considerably greater earnings but also substantially reduce their CO2 output as well," the 35-year-old added after a ceremony to christen the new ship in Hamburg port on Saturday.

"To be able to make a contribution to fighting climate change makes us all proud," the SkySails managing director said as the sail made of ultralight synthetic fibre and as big as a medium-sized passenger jet unfurled in a breeze above the deck.

SkySails developed the kite propulsion system that Beluga Shipping only just finished installing on the new cargo ship. Both firms aim to prove on a commercial scale what years of testing on smaller vessels showed: you can turn wind into cash.

Wrage, who got the idea as a 16-year-old while flying kites and wishing he could tap their power to make a small sail boat go faster, is optimistic even greater savings can be achieved. He said larger kites should cut fuel usage by 30 to 50 percent.

"That's where the savings get really interesting," he said.

But the immediate impact on cutting CO2 caused by ships will be limited. Shipping carries more than 90 percent of the world's traded goods. There are more than 50,000 merchant ships carrying everything from oil, gas, coal, and grains to electronic goods.

They emit 800 million tonnes of CO2 each year -- 5 percent of the world's total. They emit high levels of sulphur dioxide.

Yet Wrage is confident the demand will take off. There are three orders in hand and if the savings achieved on a smaller 55-metre long prototype are confirmed by the "Beluga SkySails", he said others were lined up to buy systems.

"We're planning to equip four to eight ships next year, provided the first voyage turns out as well as the trials did," he said. "In 2009 we expect to sell at least 35 systems. After that, we want to at least double every year."

"I've had a lot of meetings where shippers have said to me 'If it works out on the Beluga SkySails we're going to buy one, two, four or 10 systems'," Wrage said. "Believe me. If we're successful now, it won't be hard to find buyers."