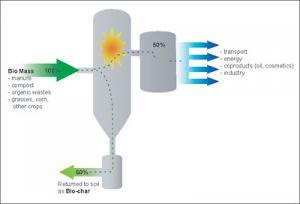 Simpler Way To Counter Global Warming Explained: Lock Up Carbon In Soil And Use Bioenergy Exhaust Gases For Energy

Science Daily — Writing in the journal Nature, a Cornell biogeochemist describes an economical and efficient way to help offset global warming: Pull carbon dioxide out of the atmosphere by charring, or partially burning, trees, grasses or crop residues without the use of oxygen.


When bioenergy is produced by pyrolysis (low-temperature burning without oxygen), it produces biochar, which has twice as much carbon in its residue than that from other sources. This makes bioenergy carbon-negative and improves soil health. (Credit: Image courtesy of Cornell University)

When bioenergy is produced by pyrolysis (low-temperature burning without oxygen), it produces biochar, which has twice as much carbon in its residue than that from other sources. This makes bioenergy carbon-negative and improves soil health.

This process, he writes, would double the carbon concentration in the residue, which could be returned to the soil as a carbon sink. The exhaust gases from this process and other biofuel production could then be converted into energy.

This so-called biochar sequestration could offset about 10 percent of the annual U.S. fossil-fuel emissions in any of several scenarios, says Johannes Lehmann, associate professor of soil biogeochemistry in the Department of Crop and Soil Sciences at Cornell.

"Biochar sequestration, combined with bioenergy production, does not require a fundamental scientific advance, and the underlying production technology is robust, clean and simple, making it appropriate for many regions of the world," said Lehmann. "It not only reduces emissions but also sequesters carbon, making it an attractive target for energy subsidies and for inclusion in the global carbon market."

Most plants pull carbon dioxide out of the atmosphere and lock it up in their biomass or in soil organic matter. But taking this a step further, Lehmann recommends heating the plant biomass without oxygen in a process known as low-temperature pyrolysis. When returned to the soil, biochar creates a stable, long-term carbon sink.

"Biochar also has been shown to improve the structure and fertility of soils, to enhance the retention and efficiency of fertilizers as well as to improve the productivity of soil," said Lehmann.

Capturing the exhaust gases from the pyrolysis process produces energy in such forms as heat, electricity, bio-oil or hydrogen. By adding the biochar to soil rather than burning it as an energy source (which most companies do), bioenergy can be turned into a carbon-negative industry. Biochar returned to soil not only secures soil health on bioenergy plantations but also reduces greenhouse gas emissions by an additional 12 to 84 percent.

Compared with ethanol production, pyrolysis that produces biochar and bioenergy from its exhaust gases is much less expensive, Lehmann said, when the feedstock is animal waste, clean municipal waste or forest residues collected for fire prevention.

Lehmann said that as the value of carbon dioxide increases on carbon markets, "we calculate that biochar sequestration in conjunction with bioenergy from pyrolysis becomes economically attractive when the value of avoided carbon dioxide emissions reaches $37 per ton." Currently, the Chicago Climate Exchange is trading carbon dioxide at $4 a ton; it is projected that that the price will rise to $25-$85 a ton in the coming years.

Note: This story has been adapted from a news release issued by Cornell University.
Posted by Jonathan Cole at 7:43 PM 1 comment: