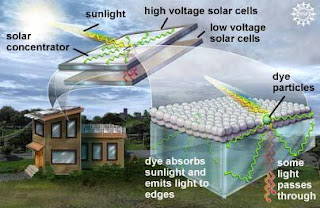 ScienceDaily (July 11, 2008) — Imagine windows that not only provide a clear view and illuminate rooms, but also use sunlight to efficiently help power the building they are part of. MIT engineers report a new approach to harnessing the sun's energy that could allow just that.

The work, reported in the July 11 issue of Science, involves the creation of a novel "solar concentrator." "Light is collected over a large area [like a window] and gathered, or concentrated, at the edges," explains Marc A. Baldo, leader of the work and the Esther and Harold E. Edgerton Career Development Associate Professor of Electrical Engineering.

As a result, rather than covering a roof with expensive solar cells (the semiconductor devices that transform sunlight into electricity), the cells only need to be around the edges of a flat glass panel. In addition, the focused light increases the electrical power obtained from each solar cell "by a factor of over 40," Baldo says.

Because the system is simple to manufacture, the team believes that it could be implemented within three years--even added onto existing solar-panel systems to increase their efficiency by 50 percent for minimal additional cost. That, in turn, would substantially reduce the cost of solar electricity.

In addition to Baldo, the researchers involved are Michael Currie, Jon Mapel, and Timothy Heidel, all graduate students in the Department of Electrical Engineering and Computer Science, and Shalom Goffri, a postdoctoral associate in MIT's Research Laboratory of Electronics.

"Professor Baldo's project utilizes innovative design to achieve superior solar conversion without optical tracking," says Dr. Aravinda Kini, program manager in the Office of Basic Energy Sciences in the U.S. Department of Energy's Office of Science, a sponsor of the work. "This accomplishment demonstrates the critical importance of innovative basic research in bringing about revolutionary advances in solar energy utilization in a cost-effective manner."

Solar concentrators in use today "track the sun to generate high optical intensities, often by using large mobile mirrors that are expensive to deploy and maintain," Baldo and colleagues write in Science. Further, "solar cells at the focal point of the mirrors must be cooled, and the entire assembly wastes space around the perimeter to avoid shadowing neighboring concentrators."

The MIT solar concentrator involves a mixture of two or more dyes that is essentially painted onto a pane of glass or plastic. The dyes work together to absorb light across a range of wavelengths, which is then re-emitted at a different wavelength and transported across the pane to waiting solar cells at the edges.

In the 1970s, similar solar concentrators were developed by impregnating dyes in plastic. But the idea was abandoned because, among other things, not enough of the collected light could reach the edges of the concentrator. Much of it was lost en route.

The MIT engineers, experts in optical techniques developed for lasers and organic light-emitting diodes, realized that perhaps those same advances could be applied to solar concentrators. The result? A mixture of dyes in specific ratios, applied only to the surface of the glass, that allows some level of control over light absorption and emission. "We made it so the light can travel a much longer distance," Mapel says. "We were able to substantially reduce light transport losses, resulting in a tenfold increase in the amount of power converted by the solar cells."

This work was also supported by the National Science Foundation. Baldo is also affiliated with MIT's Research Laboratory of Electronics, Microsystems Technology Laboratories, and Institute for Soldier Nanotechnologies.

Mapel, Currie and Goffri are starting a company, Covalent Solar, to develop and commercialize the new technology. Earlier this year Covalent Solar won two prizes in the MIT $100K Entrepreneurship Competition. The company placed first in the Energy category ($20,000) and won the Audience Judging Award ($10,000), voted on by all who attended the awards.

Adapted from materials provided by Massachusetts Institute of Technology.
Posted by Jonathan Cole at 7:18 AM No comments: